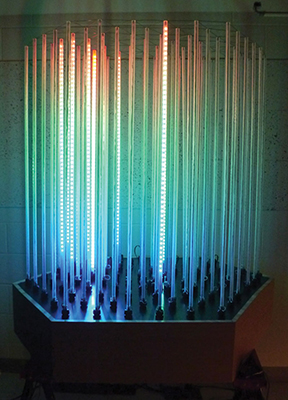 IceCube is the world's largest neutrino detector, built within a cubic kilometer of ice located between 1450 and 2450 meters below the surface at the South Pole in Antarctica. Strings of light sensors that were lowered into holes drilled in the ice form a 3-dimensional grid that records the faint light produced by particles passing through the ice. In total, there are 5,160 light sensors known as digital optical modules (DOMs).

A major part of the collaboration with WIPAC is to construct volumetric scale models of the IceCube Neutrino Observatory with 5,160 full-colour LED's mapped to the location of the DOMs. The project goals are to: build a display that can be used as a model for education and outreach purposes to disseminate knowledge on the research conducted by IceCube; use the display for the analysis of IceCube data sets by human observers; design a method for rapidly reproducing the cubic meter model of the observatory so that it can be readily built and used by researchers in the IceCube research community for education and outreach and data analysis; and use the display to conduct a study of its effectiveness in promoting observation as a baseline for evaluation for future displays.

Development of the eight cubic meter model of the IceCube Neutrino Observatory began as an optimization of an eariler model used by WIPAC for education and outreach. That version had one light per twenty DOMs represented in the IceCube array. One of the main goals of the newer version was to create a display with a 1-to-1 mapping from the IceCube array DOM's to the model LED's. TO achieve this custom printed circuit boards were developed for the interfacing of the LED's, and specialized software was developed. Later the software was modified to allow input from IceCube's data viewing program SteamShovel. A sonification module was also added to the display software so events could be heard as well as seen. The new design proved effective and revealed potential improvements that could be made for the visual identification of events for the purposes of scientific analysis. The display has been used in several exhibitions for educations and outreach events in the last 18 months, even while it was undergoing many refinements and improvements in the process. 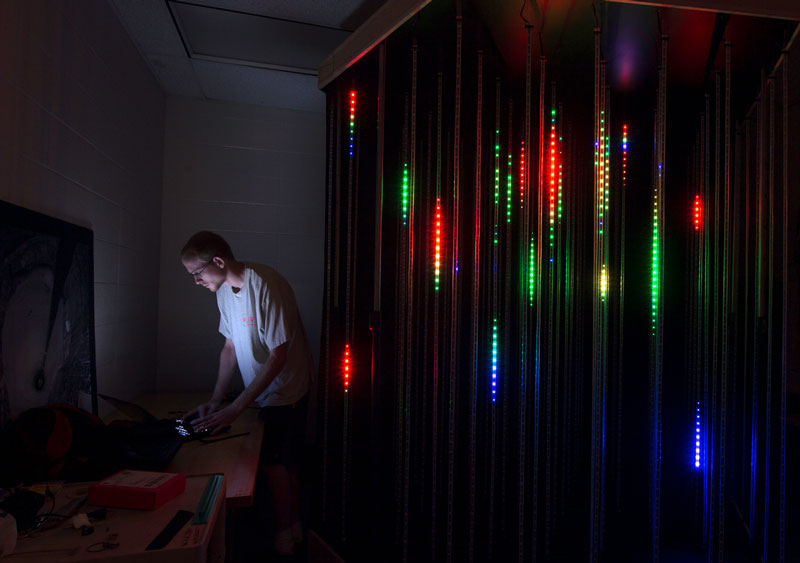 Despite its potential, little work has been done using the display in the area of scientific analysis due to the cumbersome nature of the set-up and transportation, and the space it occupies once it is set-up. This led to a desire to optimise the display so that it could be more efficient to set-up and transport. In addition there seems to be a wide interst in the Ice Cube community for such a display, so it has become inportant to develop a model that is readily reproducable and friendly to use. There is also an advantage for Hosale to build a display at York University in order to have direct interaction with the software and hardware development. Building a duplicate display at York previously proved difficult as the space requirements were too great, and it is prohibitive for WIPAC to provide funding for projects that are not undertaken under their direct supervision and in their own facilities.

This led to the concept of a more compact (cubic meter sized) volumetric display. There have been concerns that a smaller version of the CM2M display will not scale. The CM2M display uses an off-the-shelf product known as the Neopixel light strip (http://www.adafruit.com/category/168), which has a wide substrate that will cause occlusion problems within the display itself. In order to alleviate occlusion problems it will be necessary to build custom circuit boards that minimize the width of the circuit board between LED's and are populated with smaller LED's (3mm instead of 5mm). Another concern is ensuring the enclosure will be transparent enough to let the LED array be viewable from the top as well as the sides. This will require the model to be built with all the wiring on the bottom (differing from the design of the original). 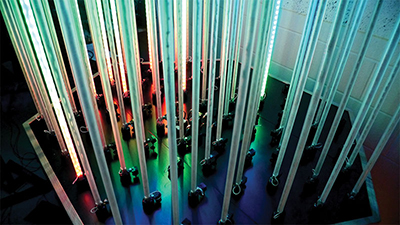 The constraints of the cubic meter display are a well-defined problem and, which quickly led to further discussion of how the goals of the project (education and outreach, and instrumentation) could be developed further. Creating a swept-volume volumetric display would allow for the scaling and zooming of data not possible on a static LED model. The issue, however, was that it was felt that such a project was beyond the expertise of the team.

The addition of Dr. Robert Allison, Associate Director of the Centre for Vision Research at York University, to the project brings a wealth of expertise in the areas of stereoscopic vision and perceptual issues in virtual environments. Allison will guide us on the use of the cubic meter display as a baseline perceptual study for the larger project of building a large-scale swept-volume volumetric display.

n-D::StudioLab
York University • School of the Arts, Media, Performance, and Design • Toronto, Canada
this site and its contents © 2021 Mark-David Hosale