nD::node .:. Hardware Platform for the Development of Media Artworks

Figure 1. Generations of nD::nodes from the early prototype known as protonode, pictured left), to the two YUNodes (v1 and v2, pictured in the middle), to the QYUnode (pictured right).

The nD::node is a low-cost, Arduino-based hardware platform[1] developed to facilitate the creation of scalable, component-based media art works at architectonic scale. The nD::node forms a networkable system capable of handling hundreds of nodes that can be spread over large distances providing control (via LED’s and actuators) while receiving real-time sensor data from the local environment (Fig. 1). The result is a high-resolution bidirectional feedback system that can be embedded in the material systems of architectonic objects.

The inspiration for the development of the nD::node stems from the problem that currently there are no low cost, ready-made, off-the-shelf solutions for the deployment of large networks of micro-controllers that can communicate with each other and/or with a central computer system bi-directionally. Systems that do exist are generally high cost, proprietary, and complicated to use, and as such, they are out of the grasp of most media artists and architectural researchers. To this end, the nD::node is being developed as a low-cost, readily deployable, open-source solution.

n D::nodes bridge the divide between the virtual and physical by providing a ready to use platform for sensing and actuation that can be used in conjunction a wide range of projects that require these technologies. nD::nodes could be integrated in every aspect of the interactive digital environments, including the walls[2], ceiling, floor[3], and in stand alone objects in the space. Results from this work could be equally applied to large scale installations and related projects that require large arrays of localized sensing and control, such as those found in the fields of architecture, computational arts, exhibition development, and related creative industries. 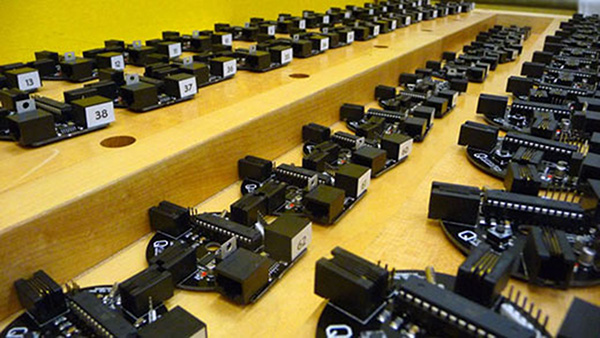 n D::nodes are developed to be a modular with the intention that the modules can be used to adapt to different projects easily. In some projects modularity happens at the level of design and once manufactured the modules are populated on a single circuit board, such as with the QYUnode used in Quasar 2 and 3[4](Fig. 2.). However, in projects such as homunculus.agora[5] this approach was not feasible due to the small space constraints of the piece and the larger circuit needed. So, it was decided to move some of the modules (such as sound, light, sensing) off board resulting in the system pictured below (Fig. 3). Moving to this multi-board modularity has other advantages as it allows for different nD::nodes to have different arrangements of modules in the same system, and it allows for rapid prototyping of future projects due to the reconfiguration of existing modules, and its easy interfacing to new modules and prototype circuits. 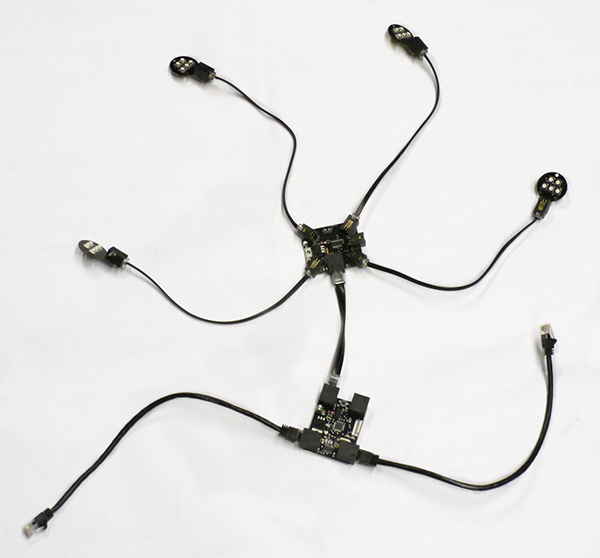