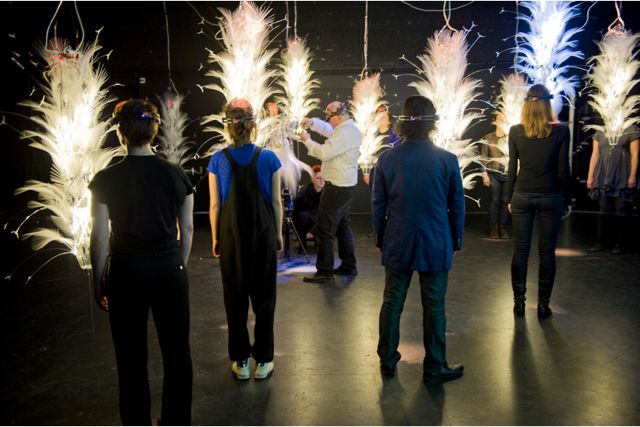 This bundle of events will focus on the integration of protocell chemistry into the next generation of Philip Beesley’s Hylozoic Ground  Series. Protocells are the elements the series is made from. Beesley will give an introductory talk. Then Beesley will present a quasi-metabolic ‘happening’ that uses collective neurosignaling to grow next-generation Hylozoic Series protocell formations. Participants will be given headsets and divided into two groups. Sound and light stimuli will synchronize the groups’ thought patterns, which will in turn drive syringe pumps feeding a protocell mixture. This primitive, quasimetabolic system integrates human thought patterns with interactive computing and synthetic biology. The notion of a collective consciousness is at the heart of the event.[1]

The highlight of this event was a performance piece that involves nine performers who are connected to EPOC Emotiv headsets. The Emotiv headset is performing conventional EEG, EMG and EOG measurements.  EEG is indicative of neuronal activity in the brain.  EMG is associated with the electromyographic (muscle activity) of the corrugator and zygomaticus facial muscles associated with smiling and frowning and smiling.  EOG is associated with the movement of the eyes. For the performance the primary data source we used was the EEG data signal, which were used to help determine the performers state of consciousness. In particular, whether the performer was exhibiting primarily alpha waves (which indicate states of concentration), beta waves (which indicate states of relaxation), and theta waves (which indicate dream-like states, similar to sleeping).


Video of the performance portion of Evening of.. Philip Beesley. 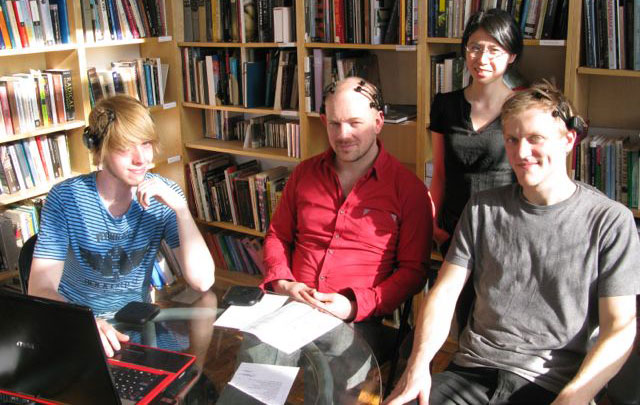 The excitement of the columns in the performance is expressed in the stimulation of the kinetic feathers on the columns. An additional sound is mapped to the columns, allowing the columns to whisper to their human counterparts as the mediation continues. This communing continues to grow more intense as the ceremony goes on. 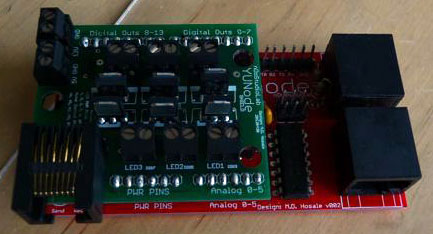 YUnode with shield interface, used to control the columns 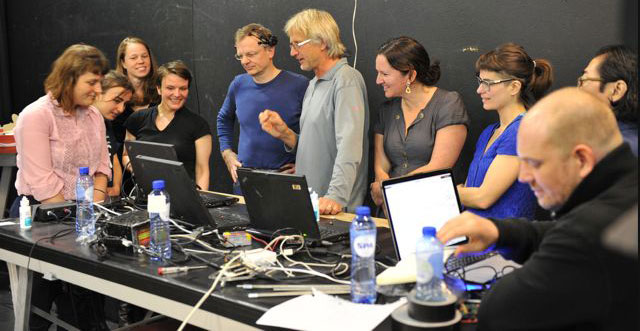 Alan Macy preparing the performers for the event.

At the climax of the ceremony the filter clusters begin to come alive, their arms move-up and down slowly in a cyclical fashion. At the heart of the filter clusters, the protocells begin to metabolize various toxins that are injected into them by Philip Beesley. (This metabolization continued throughout the rest of the evening.) At this moment the process of collective consciousness protocell stimulation has completed. The ceremony began to reverse, with the columns and the whispers becoming quieter, and the performers leaving the stage one-by-one. 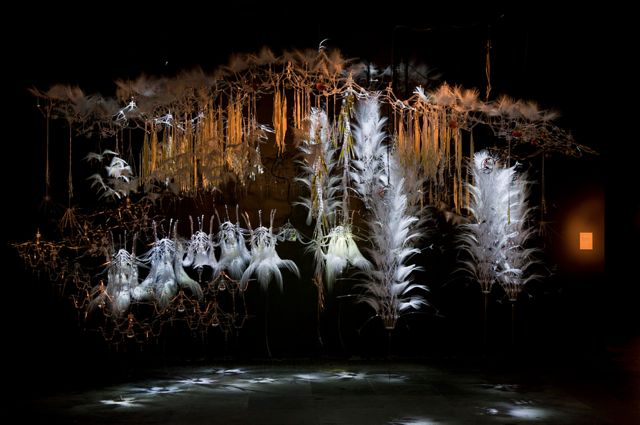 The columns used in the piece turned out so well that they ended-up being included in the PROTOCELL FIELD in the DEAF exhibition in the Oude Postkantoor in Rotterdam.

While working on this project I have been looking towards three main inspirations:

1) First and foremost was the Brion Gysin Dream Machine: http://en.wikipedia.org/wiki/Dreamachine which seeks to evoke a dream state by syncing the brain's alpha waves to a regular meditative patterns- the columns attempt to do this as well, but in the columns the link between the two is bi-directional as the pulsing of the column is connected to the brain activity of the performer, while the performer's brain activity is influenced by the pulsing of the lights themselves.

2) Is the connection of the process of the performance to that of a Tibetan Buddhist meditation ceremony. The form of the Tibetan meditation ceremony was used as structural inspiration and as a process to reaching other states of consciousness. This is for utilitarian reasons, but for philosophical reasons as well. For, as in a Tibetan meditation ceremony, the performance seeks to reveal that which is not seen, it seeks to reveal something hidden about ourselves, and it attempts to bring us closer to become one with nature (albeit a synthetic nature, still one that is Hylozoic nonetheless).

3) The third connection is to epistemology, which is deeply personal to me and my work. This piece in many ways explores a new type of knowing, one that is vastly intimate, and truly sublime. The potential I see is not only the ability to capture our sight, sound and senses and integrate them into the world around us and each other. It is clear that all the states of our currently reality (virtual, real, cogno, bio, synthetic, organic) are merging as the lines between these states are becoming more and more blurred. My mentor, Marcos Novak, often recounts the history of knowledge as a succession of many phases, or rather a 'ladder.' For this I will paraphrase:
In the past it was determined that someone knew something if they could repeat it (such as the Iliad), then, later, it was determined that someone knew something if they could describe it. Eventually, it was determined that someone knew something if they could build a working model of it (the Newtonian model). And,perhaps skipping one or two rungs...eventually one comes to the top of the ladder and a question comes to mind, what does it mean to know now? One possible answer is that in order to really know something you must become it (that is embody it). [3]

So as we explore this piece, what I see happening is a fusing of domains, a glimpse into the future, and a premonition of who and what we are becoming.

[1] This description is taken from: http://www.deaf.nl/program/modules/evening-of-philip-beesley.

[2]The flickering of the light on the columns enhances the meditative affect of the sound.  In developing this medium the hope was to lead to a state of mental synchronization among the performers. This is based on a psychological phenomenon known as the flicker-affect, as explained int he following article: http://www.mindplacesupport.com/Downloads/REF_clinicalguide.pdf

[3] When I asked Marcos about this he responded:
"I remember the epistemological sequence you're talking about. It's one of several "ladders" I spoke of. I'd have to comb through my papers to see where I first mentioned it. The sequence, as I present it,  begins as you describe it, passes through several stages to simulation, and ends with 'embodiment' -- the example being the phenomenon of life itself, which makes it clear that the final proof of our understanding of life (or consciousness) will be to be able to create life (or consciousness), from raw materials. Transvergence goes a step further in proposing and pursuing speciation, and the "the production of the alien." The absolute ultimate would be "worldmaking" (with the ecological notions of "perforated systems" and all the rest). This is not an idle proposition -- the problem of assembling an ecology of diverse agents from basic elements being more complex than assembling any one. Finally, in my framing of all this, the root is the "alloatomic" -- the generalization of all the various kinds of atomism into the minimal set of necessary and sufficient principles required to build a world. There is actually a lot more to this, philosophically, but perhaps this is expansive enough for your present question."

I think your recollection of "knowing is becoming" comes directly from the idea of "embodiment," mentioned above, which I always juxtapose to "representation"  -- hence it is one thing to represent bravery, as an actor might, and another to embody it, as a person who acts bravely under really challenging circumstances might.